The Robotics competition program provided by McAllen ISD is expanding opportunities for district students and showing exceptional growth, with teams now present on every district campus including the elementary level, and robotics competition excellence has been especially noteworthy at McAllen High School, which achieved a state championship in U.I.L. competition in 2017-2018.

Students from McAllen High School, largely from the Zeus robotics team but also including members of other robotics teams, represented the district at the 2019 State U.I.L. competition in Austin on Saturday, April 6. 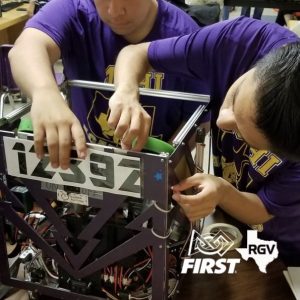 Diana Pena, Coordinator of the McAllen ISD Career Technical Education (CTE) Program, emphasized, “The Robotics program is certainly of tremendous benefit to the district and to the community as a whole…I’m very pleased about how the program has advanced in McAllen ISD, both in terms of quality and quantity.”

CTE Director Lily Sandoval Silva commented, “The program compliments the McAllen ISD framework very well. It enables the Robotics students to work as a team, which will reflect what the real world is like. They need to know how to communicate effectively…They learn how to be creative in many ways, and they need to know the different aspects of problem solving. These are skills that are needed for a strongly and effectively functioning economy.”

“Robotics competition arrived in the Valley seven years ago and in McAllen ISD four years ago,” recalled Pena. “Harlingen ISD picked up the competition seven years ago…The FIRST Robotics competition originated at Nikki Rowe High School with one team and three students…In 2019, there were four teams from McAllen High and one team from Nikki Rowe High that qualified for state…McAllen High won the U.I.L. State Robotics championship for 2017-2018, and McAllen won the Rio Grande Valley championship in 2018-2019.”

She added, “We have a First Robotics team at every district campus – elementary, middle school and high school. We have 52 teams districtwide with over 1000 students participating. This makes McAllen ISD a 100 percent FIRST district as far as Robotics competition is concerned. This was the first year that all elementary schools have had active teams. In 2017-2018, half the elementary campuses had robotics teams.”

Jason Arms, president of FIRSTRGV, indicated that there are presently 398 teams at Valley schools compared to only 11 in early 2015. He noted that “McAllen ISD is one of only three Valley school districts that are 100 percent districts, the others being Harlingen ISD and Vanguard Academy….We started off with four teams in McAllen ISD and there are now 103 teams, with even more to be added next year.”

“If Robotics is successful at the high school level, it has to start from the ground up at the elementary and middle schools,” Pena contended. “Rayburn and Milam Elementary Schools had very successful teams last year and they (the students) moved up to Morris Middle School, which had the highest performing robot in FLL (FIRST LEGO League) competition in the Rio Grande Valley Region for 2018-2019…Two of the grand champion qualifiers below the high school level, Morris Middle school and Rayburn Elementary, were from McAllen ISD…The Morris sixth grade team qualified for championship competition.”

She pointed out that McAllen High “had the highest performing robot at the First Tech Challenge” UIL competition in February 2019. According to program leaders, FIRST LEGO League “engages younger students with real-world engineering by challenging them to build LEGO-based robots to complete tasks.” 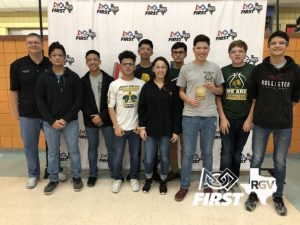 Pena recalled that a memorable moment happened in February 2019 when retired astronaut Mike Fossum, a 1976 McAllen High graduate, “gave the students a model arm of the type that the astronauts use in doing a space walk. He presented that award to the highest ranking team at the RGV FTC (FIRST Tech Challenge) Regional competition. Victor Menchaca was the captain of the team (from McAllen High).”

“McAllen ISD focuses on the core values of students, including emotional intelligence,” the CTE Coordinator explained, “Robotics competition blends in very nicely with this focus.”

Sandoval-Silva pointed out that robotics competition “enables the students to know and apply the essentials of coding,” adding that “the Engineering Design Notebook is 60 percent of the competition and the Robotics Challenge is the other 40 percent.”

McAllen High Robotics Instructor Robert R. Saldana pointed to the tremendous expansion of the school’s robotics program since the spring of 2016, when Josie Cornejo started the first team, the 11009 Robodogs, in the FTC (FIRST Tech Challenge) category.  In the 2017-2018 school year, Saldana directed the program’s expansion to create nine FTC teams. The expansion, he noted, meant “adding an FTC component to each of my classes while also maintaining the veteran teams. Adding each of these new teams allowed my new freshmen to explore the possibilities of FTC and First.”

After being hired at McAllen High for the 2016-2017 school year, Saldana added the second FTC team, 12392 McHi Dogworks. Both teams qualified for Alamo Regionals in San Antonio that year.

Saldana noted that McAllen High received an invitation in early 2018 to the U.I.L. state competition that featured 30 1A through 4A and 30 5A and 6A teams, with only one team from each school allowed to compete, but other team members from the same school were allowed. McAllen High brought a roster of 15 students and finished 12th among 30 teams as they won three of five matches. They were chosen to work with teams from Cedar Park and Laredo.

They won their semifinal match 2-0 and lost their first match of the finals, but came back to win the final match 2-1 as McAllen’s representatives combined with the Cedar Park and Laredo teams achieved victory, “allowing us to become the first U.I.L. State winning alliance,” declared Saldana.

Saldana noted that “with the success of McHi Robotics this year, we were invited to attend UIL state (competition) again this year. This year Zeus will be representing us; however, they will be getting help from the other McHi teams.” State UIL competition is scheduled for Saturday, April 6 at Palmer Events Center in Austin.

“We are just getting started,” insisted Saldana. “We have many opportunities coming up…FIRST is more than robots. These students do many hours of volunteering and outreach throughout the year. We have many programs coming up, including a partnership with the McAllen Library to give STEM classes.”

In reference to coding, Saldana explained, “Coding is an essential part of what we do…Our students code, or program, the robots using Android Studio which uses the Java programming language…Our students use two Android phones to control the robot via Wifi-Direct. One phone is connected to the robot and the other is connected to a Logitech gaming controller. Our students code each of the buttons on the controller to control the robot to their liking which may also affect the robot design and precision, so they must be wise in how they code it.”

“We also are able to code the robot to function autonomously,” added Saldana. “We use many different sensors to move or function on its own. The most interesting of all the sensors is the phone’s camera.”

“Robotics competition is a small component of the FIRST program,” explained Arms. “Students learn a number of non-mechanical skills such as conflict resolution, critical thinking, and emotional learning. Actual robot construction is not the biggest component. Students also learn troubleshooting skills on a significant level.”

He continued, “Students learn how to cooperate and show gracious professionalism to both colleagues and competitors. The program (competitive robotics) teaches building techniques, principles of engineering, and programming skills.”

Arms indicated that FIRST RGV, a local nonprofit organization, “was formed in early 2015 to support local robotics teams…Robotics teams were formed in Brownsville in the mid-2000’s,  but they shelved the program in the late 2000’s before resuming it in 2018-2019.”

“Once you are involved with the program, you see its impact,” emphasized Arms. “Community leaders, elected officials, and business leaders have provided crucial support for the program. Kids and teachers really enjoy the program and see its benefits…Robotics helps create a culture of teamwork and lifelong professional skills.”

Robotics competition has obviously caught the imagination of McAllen ISD students and should grow further in popularity in the near future. The benefits that students have acquired will enable them to be better equipped to achieve professional success, and also help the process of community development.