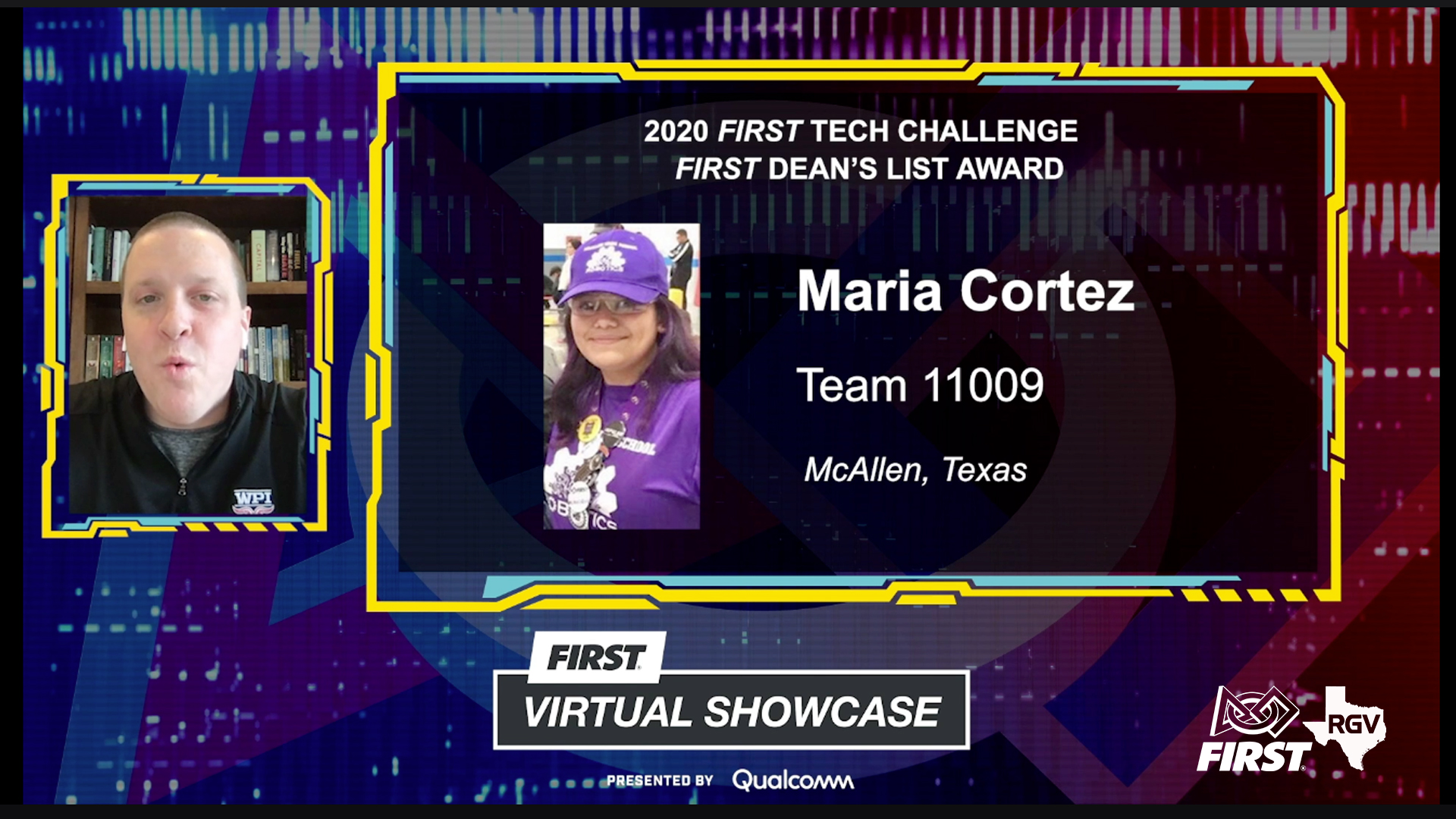 MCALLEN, Texas – When Maria Cortez, a senior at McAllen ISD, took her first STEM class she was shocked at what she saw.

“I am not going to lie, the first day I thought I was in the wrong class because I was the only girl. I was like terrified, Cortez said. “But, I said, okay, I will stick with this.”

Cortez is pleased she did because that first class focusing on science, technology, engineering and math, led to her involvement with FIRST RGV, a nonprofit that organizes FIRST robotics competitions for school aged participants.

And involvement has helped solidify a place at the Massachusetts Institute of Technology, where she will likely study biological engineering.

Cortez was born in McAllen to parents who immigrated from Mexico. Her mother Nora Lopez and father Enrique Cortez met in Reynosa, Mexico, while working in an empresa making cell phones. Both had a love of math which, Maria Cortez said, she inherited.

“I never really noticed some people did not like the fact I was here. I did not know people did not like Mexicans,” Cortez said. However, she said she had a loving childhood, first as only child and then, when ten years of age, as a big sister to Samantha. Her younger sister also likes math.

Cortez’s mother now works at a local retailer and her father is a carpenter and house builder.

Asked if she always had a love of science, Cortez said: “I loved reading, that is how I learned English. I always loved things to do with science. I always enjoyed math.”

However, it was only when she was a freshman in high school that she knew for sure she wanted to focus on STEM. In fourth grade she had been asked to do a science project, to make a map featuring light bulbs. Cortez made one of the United States, with a light bulb going on when the name of the state was touched. She said she had fond memories of this exercise because she built it with her father.

Going back to that first STEM class at school, Cortez recalled that she and her classmates were asked to make a robot. She thought it was just a class exercise. In fact, it was for a FIRST Tech Challenge competition.

“It was not until later in the year that I realized, this (FIRST) is an awesome program, I enjoy doing this,” Cortez recalled. “I like working with others. I enjoy seeing the success we have together. I enjoyed seeing us improve. I liked seeing the ideas other people have. It just opened a whole new world. It really did.”

With FIRST, Cortez said, students are paired up with random teams from different schools to compete in alliances.

“You do not know who your teammates until the day of the competition. When you go up north, the competition is insane. You want to write everything down. One of the things I love about this program is it teaches you to move forward, not to place blame on anyone. It is a team effort.”

Asked what she has learned from FIRST, Cortez said: “Learning to take a loss.” She said that one year she and her colleagues made a “bad” robot that would never work properly.’

“No matter how many reiterations we did, how many times we tried to fix it, it would not work. That happens in life. That year, even though our robot was not working, we ended up getting one of the better awards. It was called the Inspire Award. We did all these other things, we reached out to the community, we were on social media, we were doing volunteer events, all these different things. It is about helping out the community, helping other teams.”

Another great thing about FIRST, Cortez said, is it helped her overcome her shyness. “In the competition you cannot be quiet. You have to step out of your comfort zone. You have to do all these things you are not used to doing,” she explained.

Cortez reflected on the journey to become the Rio Grande Valley’s nominee for the FIRST Dean’s List Award and she said that that is only given to those students who truly embody what FIRST is. It’s an opportunity that is available in all areas of the world, but to earn recognition globally, it is only for 10 students each year. That is 10 students out of more than 600,000 in more than 100 countries.

“When I was interviewed, I was really nervous, I did not know what to say. But I was too busy helping others, so forgot about it, I had actually forgotten about the interview. I did not think I would be chosen. With my background, I did not expect it.” Maria went on to discuss her interview and she recounts that it focused on her, how she has overcome challenges in her life, how she has dealt with adversity and mostly… what has she done to help others.

Cortez said, “When I was selected at our South Texas Regional Championship, I was so shocked. I was not expecting it … I made it as a Finalist to be evaluated among the hundreds of nominees from around the world.  It took a while for it to sink in that I was representing all of the students across the valley in the program”.

Her journey didn’t end there. Her nomination put her in a group of students that had done things such as started their own non-profits, worked to create apps to improve access to services and those that created reports identifying areas needing resources to improve our communities. But in no time, the call came that Maria had been named into one of the ten prestigious slots as a Dean’s List Winner.

Getting on the Dean’s List means a goodie box with a huge backpack, a water bottle, a stuffed bear, and a customized pin. However, most importantly, it includes a letter of recommendation from the founder of FIRST, Dean Kamen, to any university. “You also get a glass trophy and a plaque for the school,” Cortez said. “I also got a virtual tour of MIT and got to meet the others that are going there.”  I also learned that FIRST started as a graduate class at MIT so basically, I was going to the birthplace of FIRST.

Later, Cortez received an email explaining that, by being on the Dean’s List, she would receive a full year of scholarship for first year.

“I was staring at the screen. I told my mom, hey, come over, tell me if I am seeing this right. This is how much it costs, and this is how much they are giving me. At the bottom, this is how much you have to pay. Zero dollars. I just started crying, bawling my eyes out, because I was not going to go into debt for the first year. It is the most amazing feeling ever.”

Cortez has never visited Boston before. Her nearest family member lives in Michigan. Nonetheless, she is excited about going to college.

Asked if her younger sister, Samantha, will follow in her footsteps, Cortez said: “She wants to be a teacher. I read nonstop. She really likes math. It comes easy to her. I have high hopes for her, Samantha.”

Cortez’s mind went back to that first day in the STEM class.

Cortez said she is surprised how far she has come.

“I never thought I would get this far. You surprise yourself. My mom said, you were in there with all those guys? Yeah, I was in there with all these guys. Robotics is majority guys, I don’t know what to tell you? And when I see other girls in the program and they are doing amazing, it encourages me to keep moving forward.

“So, just go for it. Nothing bad is going to happen. It worked out for me, why won’t it work out for you?”

FIRST is one of the largest STEM programs in the Rio Grande Valley. To learn more or to join FIRST in a school near you, please visit their website https://firstrgv.org  The Rio Grande Guardian is a proud supporter of FIRST and FIRST RGV.