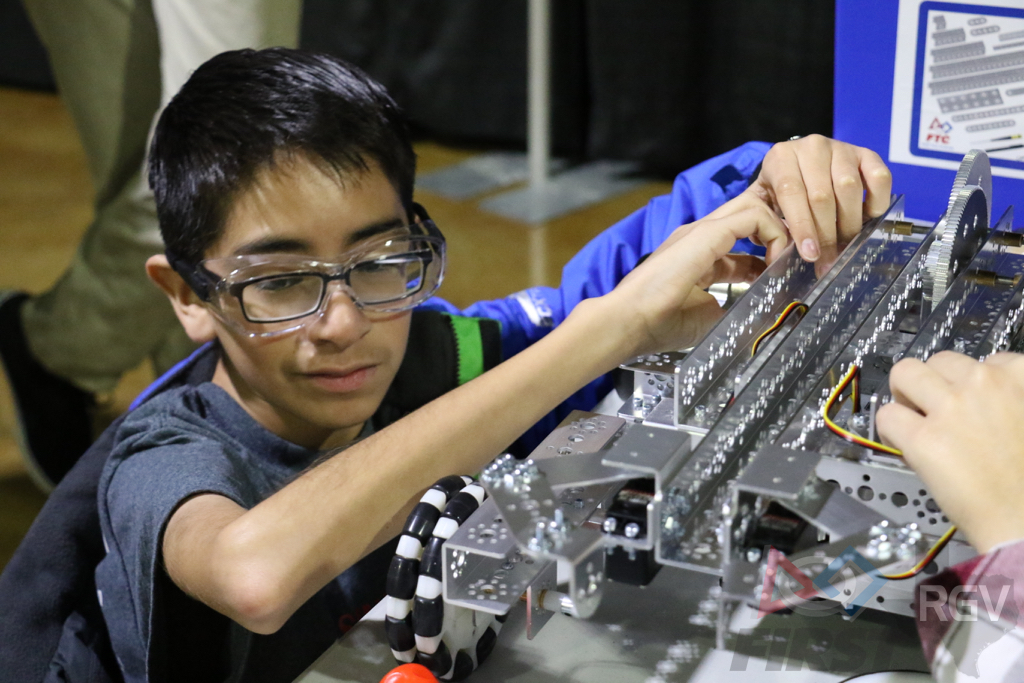 [text_output]Teams from all over the valley came together at the Boggus Ford Events Center in Pharr, Texas on January 7, 2017 to have two different, but a uniquely sequenced day of robotics fun for all of the FIRST-RGV teams.

Starting at 9am, teams that had signed up for the FIRST ROBOTICS COMPETITION (FRC) arrived promptly so local program coordinator Jason Arms could get sync’d up with the world-wide broadcast of important game information on this years new game and special instructions. More than 150 kids, teachers, parents and even a FRC Team Coach from North Dakota arrived and got a chance to view the amazing game animations and inspirational information from US FIRST; specifically Dean Kamen, founder.

It is truly amazing watching these kids light up when the game for this year was announced, said Jason Arms, FIRST-RGV President. This is exactly why I do this year after year as a volunteer, Arms added.

The broadcast included some truly comical singing and staged dialogue by both people with US FIRST and FIRST teams, but it was all to show how much fun you can have in the very broad science, technology, engineering and math (STEM) program.

Starting at 11am, teams that had signed up for the FIRST TECH CHALLENGE (FTC) arrived and started setting up their robots, tools and displaying their team pride banners in anticipation of their first attempt at competing in the valley this year. The Rio Grande Valley (RGV) has been allocated four total leagues. They are the BLUE, RED, SILVER and GREEN leagues; which puts the RGV 2nd in the state for total number of teams according to stats received from the Alamo Region headquarters of FIRST in Texas. Each league is comprised of approximately 12-18 teams and are sprinkled around the entire valley.

The start of match 1 was very somber while the teams went through the qualifying process to verify their robot was the correct size, had no loose parts that could fly off and met the guidance of FIRST for competition. Once the teams got use to the process, they became louder and louder cheering each other on during their matches. A total of 14 matches were conducted over the course of the 6 hour day that resulted in Harlingen High School receiving the most points and therefore was the winner of the RGV FTC League Meet 1A.

Different teams will meet up on January 14, 2017 at Southwest High School in Pharr, Texas for the second part of League Meet 1A in what is anticipated to be a packed dual gym competition. Stay tuned for pictures and a great story from that event next week! For more information about FIRST or STEM programs in the RGV, please contact us here at FIRST-RGV.[/text_output]

[line][custom_headline type=”center” level=”h4″ looks_like=”h4″ id=”” class=”” style=””]A very special thank you to the City of Pharr and Dr Daniel King, Superintendent of PSJA ISD for visiting with our teams individually and offering your words of support.[/custom_headline]